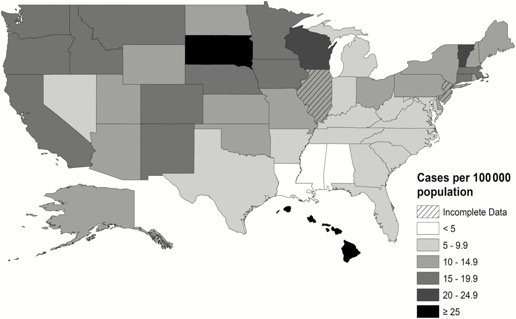 Motivation: Campylobacteriosis is a foodborne illness that is surpringly understudied given its high prevalence. The last comprehensive paper on the topic was published in 1987, and it only covered a few states. Here, we set out to describe the epidemiology of the disease, its outbreaks, and the extent of resistance to several classes of drugs.

Results: The average annual incidence rate was 11.4 cases / 100,000 persons. We found substantial variation by state and age, with states in the West and children aged 0-4 having the highest incidence rates. Men had higher incidence rates than women across all age groups. Over the study period, annual incidence rates increased, with the increased being concentrated in Southern states and among adults over 60 years of age. Similarly, the number of (primarily foodborne and waterborne) outbreaks increased during 2004 - 2012. Finally, we found a higher proportion of ciprofloxacin-resistant isolates among domestic infections in later years.

Interpretation: The increasing rates of disease, outbreaks, and antibiotic resistance related to Campylobacter infections point to an urgent need for additional research into this very common infection. The hetergeneities we document suggest that different strategies for infection control may be needed for different states and population subgroups.

Article availability: The freely available article can be found here. If you have trouble accessing the article or wish to ask a question about it, please contact me.