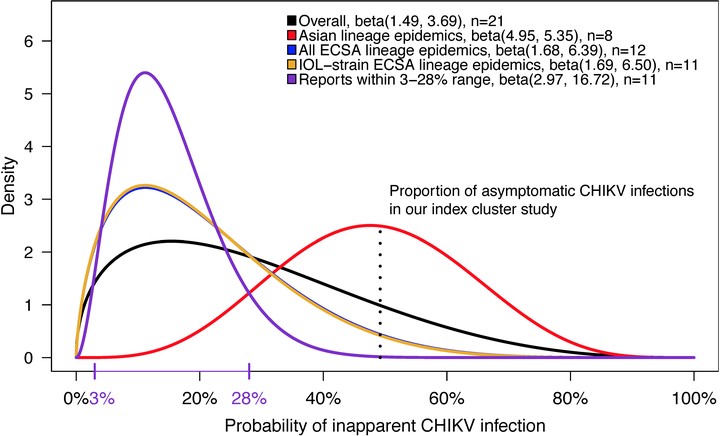 Motivation: Literature reviews commonly state that the proportion of inapparent CHIKV infection is bounded between 3 - 28%. Several large studies have reported values for this parameter outside the supposed range. In 2015, the Asian CHIKV lineage caused a 2nd epidemic in Managua, Nicaragua. At the time, we set out to estimate the proportion of inapparent CHIKV infections using an index-cluster design.

Methods: From October to November 2015, 60 symptomatic CHIKV-infected children were enrolled as index cases. We then enrolled 236 of their household contacts who served as the primary analytic sample. We visited the households several times to ask about symptoms and to take additional samples to capture new CHIKV infections.

Results: Of the 236 household contacts, only 63 experienced infections during the study period. 31 (49%) of 63 infections were inapparent. To resolve the conflict with the expected 3 - 28% range, we performed a Bayesian analysis where the priors were derived by a systematic literature search. We found that the prior for the parameter built from Asian lineage studies (mode at 48%) was very different than the prior built from ECSA studies (mode at 19%), suggesting lineage-specific differences existed in the percentage of inapparent CHIKV infections. Further analyses characterized the extent of this difference.

Interpretation: Our takeaway message is that CHIKV lineage plays an important part role in human health, as large differences are seen between epidemics caused by the Asian and ECSA lineages when all the relevant studies are assessed. This observations explains why Asian lineage outbreaks, like the one in Managua, consistently report a higher percentage of inapparent infection that the 3 - 28% range admits. We found evidence in the literature that lineage also affected the pathology of the disease and the immunological response to the virus. Thus, CHIKV lineage may be an important - but previously unrecognized - determinant of human disease.

Article availability: The freely available article can be found here and a tweetorial on this article is available over here. If you have trouble accessing the article or wish to ask a question about it, please contact me.