Seroprevalence, risk factor, and spatial analyses of Zika virus infection after the 2016 epidemic in Managua, Nicaragua 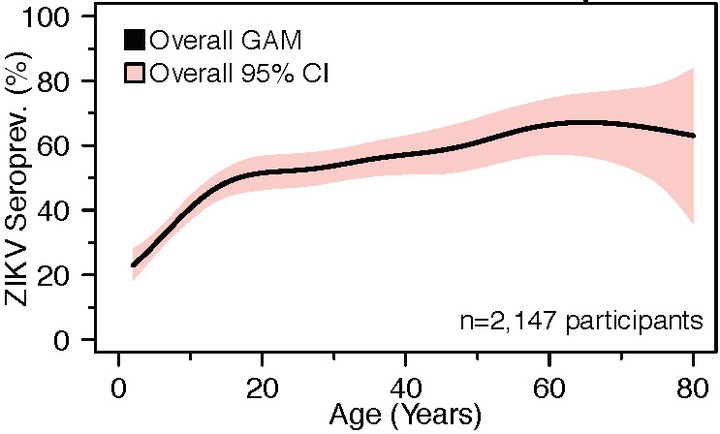 TL;DR: Prior to 2016, Zika virus had not entered Nicaragua or its capital, Managua. During the course of the 3-month Zika virus epidemic in Managua during July - September 2016, an astonishing 36% of children (ages 2 - 14) and 56% of adults (ages 15+) were infected by the virus. Overall, 46% of a city-representative cohort had evidence of ZIKV infection after the Zika epidemic. These results were ascertained by the Zika NS1 biotinylated BOB ELISA, a serological assay shown to have high sensitivity and specificity for Zika virus, even in individuals previously infected by dengue virus. The high level of immunity to Zika virus after the short, explosive epidemic suggests that the possibility of a similarly large epidemic affecting the population of Managua is low in the near future.

Motivation: Zika virus (ZIKV) entered Managua, Nicaragua in early 2016. At the time, few studies existed that documented ZIKV seroprevalence in the Americas. An accurate assessment of ZIKV serprevalence was hindered by the high degree of cross-reactivity between ZIKV and the closely related dengue virus (DENV). We sought to overcome these limiations.

Interpretation: Our work is the largest ZIKV seroprevalence study in the Americas and the only one in Central America. The relationship between ZIKV seroprevalence and body surface area is likely explained by mosquito behavior; all else equal, mosquitoes prefer to bite larger persons; in addition, larger persons release more carbon dioxide when they breathe, which is a mosquito chemoattractant. The high population-level immunity to ZIKV implies that a second ZIKV epidemic in the near future is unlikely.

Article availability: The freely available article can be found here. If you have trouble accessing the article or wish to ask a question about it, please contact me.